Anatomy of the Shoulder Joint 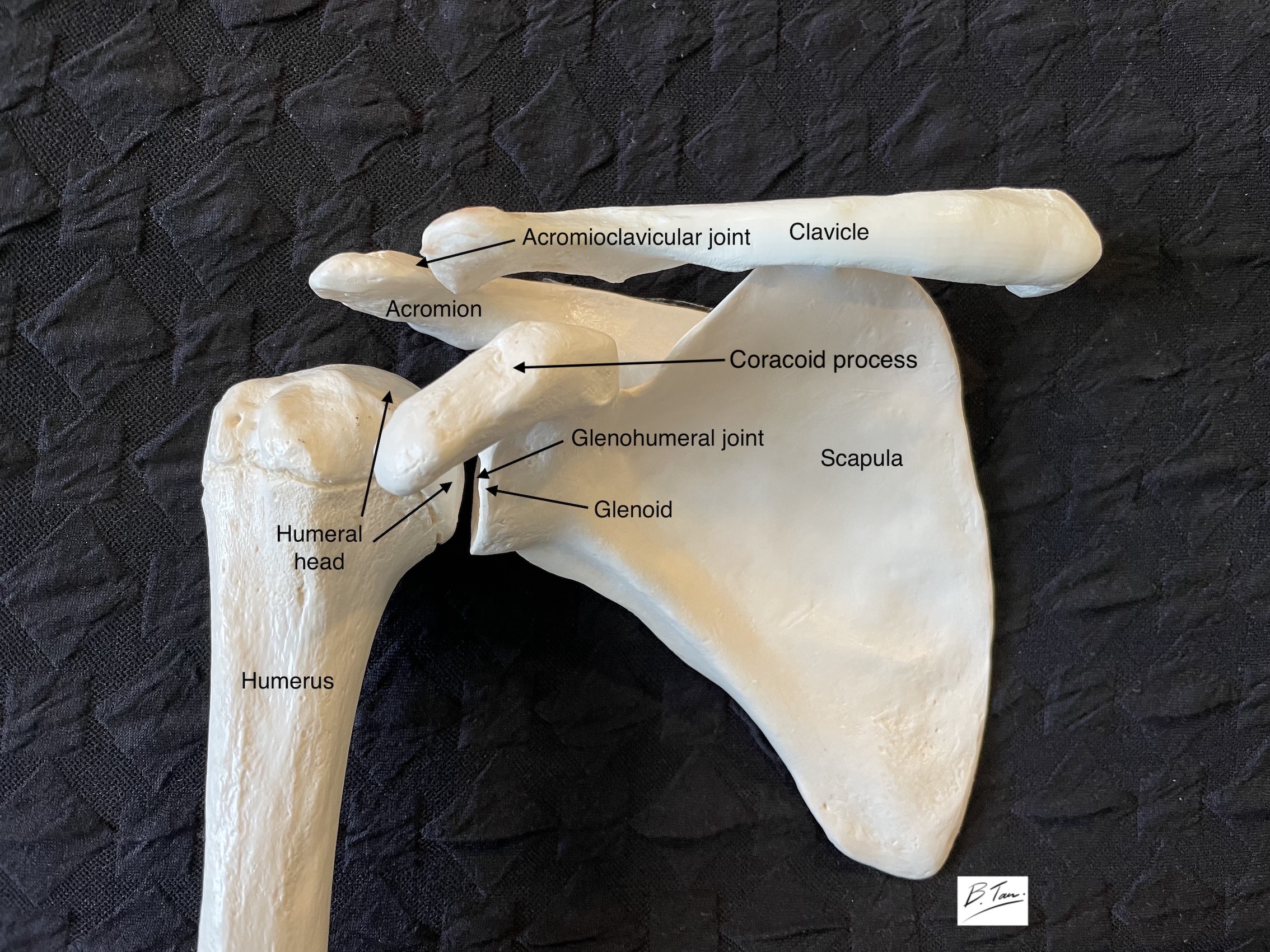 Bones that make up the shoulder

The shoulder joint is made up of 3 bones: the shoulder blade (scapula), the humeral head and the collar-bone (clavicle). 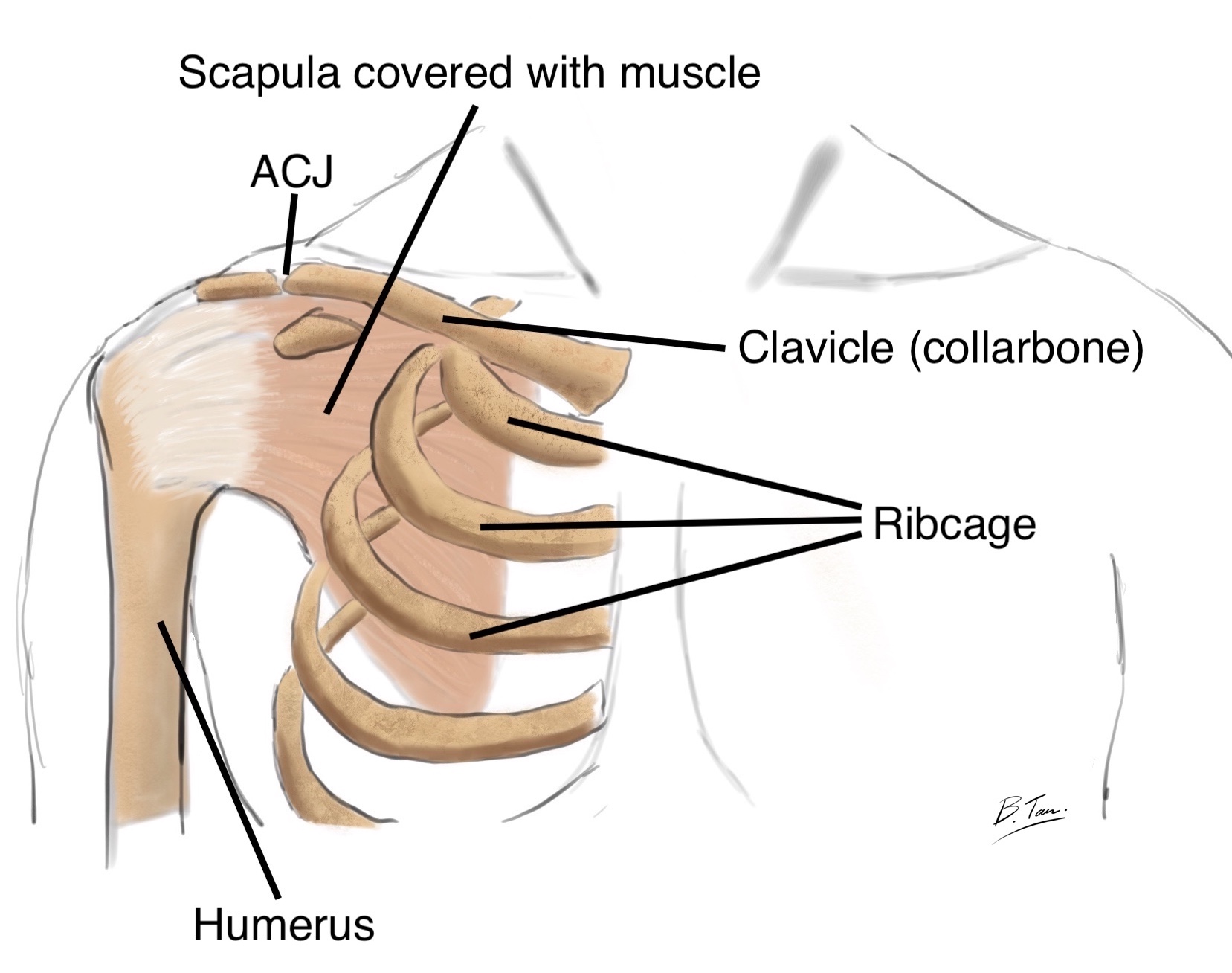 The scapula and humerus in their natural position behind the ribcage 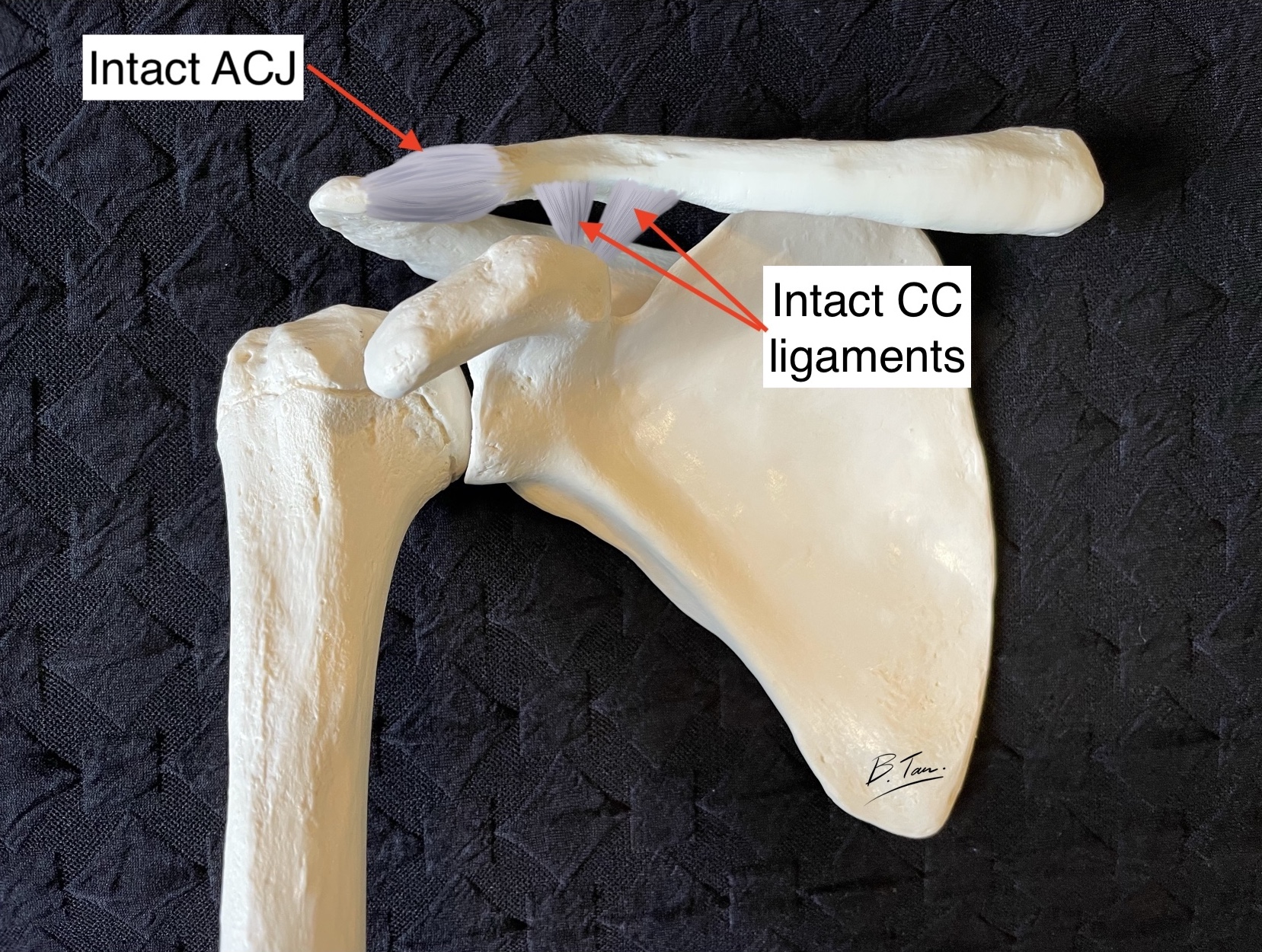 The ACJ is a rather small joint between the clavicle and a part of the scapula known as the acromion. The acromion forms a roof over the glenohumeral joint which is often regarded as the “main” shoulder joint. When we raise our arms, majority of movement occurs at the glenohumeral joint and scapulothoracic articulation. Only small gliding and rotatory movements occur at this joint. Despite the fact that such little amount of movement occur through this joint, this small joint has to deal with large forces.
‍
The joint is held in place by several structures:
1. The joint capsule (the covering of the joint)
2. Ligaments found within the capsule of the joint (known as the AC ligaments)
3. Ligaments that are attached, on one end to the coracoid process (part of the scapula) and on the other end, to the clavicle. These ligaments are called the coraco-clavicular (CC) ligaments 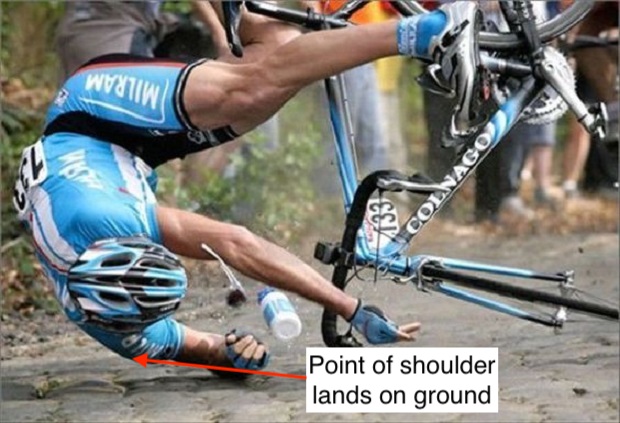 Common way of injuring the ACJ

Sports injuries are the most common cause of ACJ dislocation. Often times it is the result of direct impact on the point of the shoulder. The most common scenarios I see are when patients trip while running fast causing them to tumble “head over heels” or when cyclists pitch over the handlebars after having hit a pothole or a branch on the road. In almost all of these scenarios, the patient lands hard directly on their shoulder.

What symptoms will I experience? 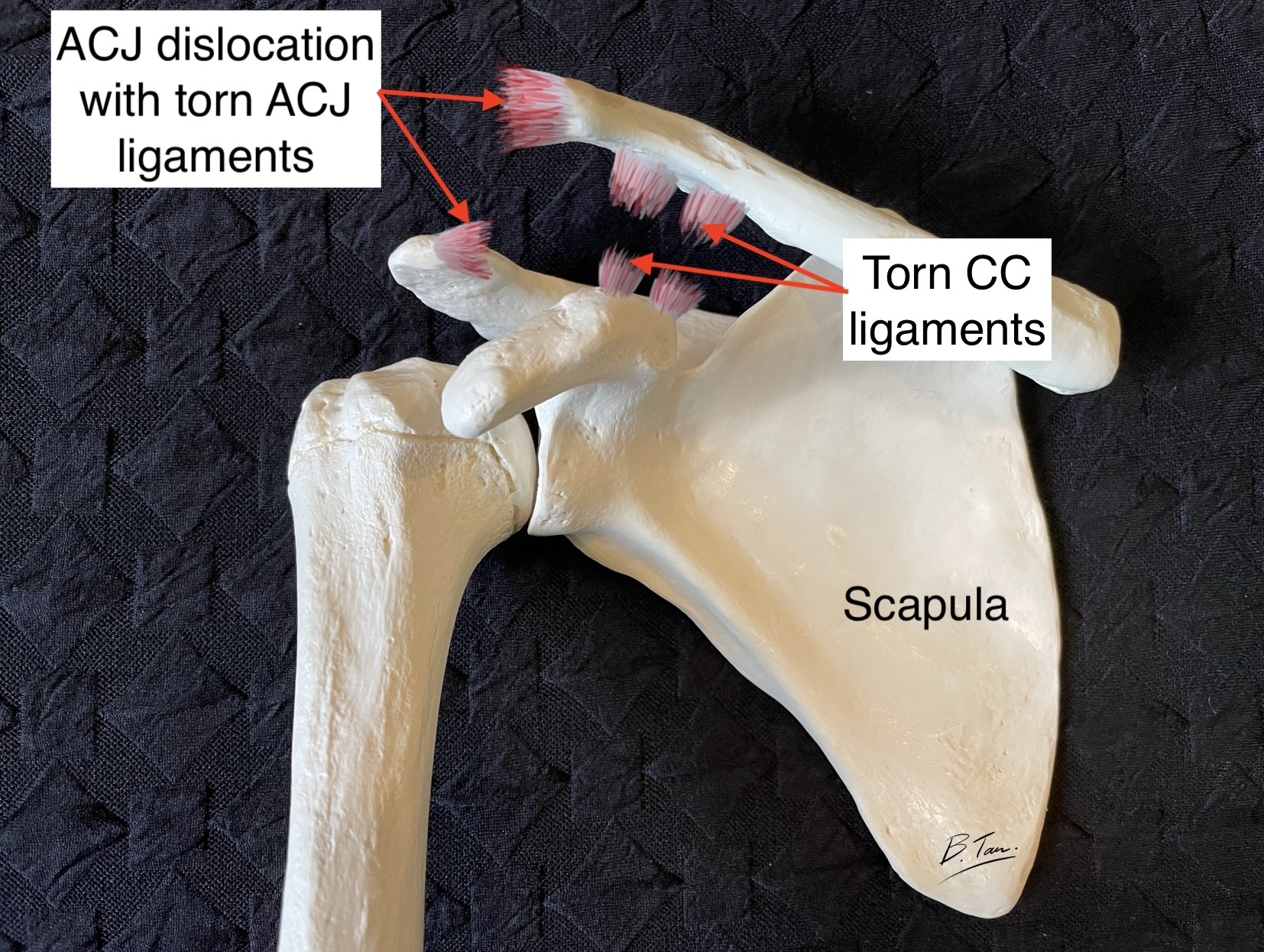 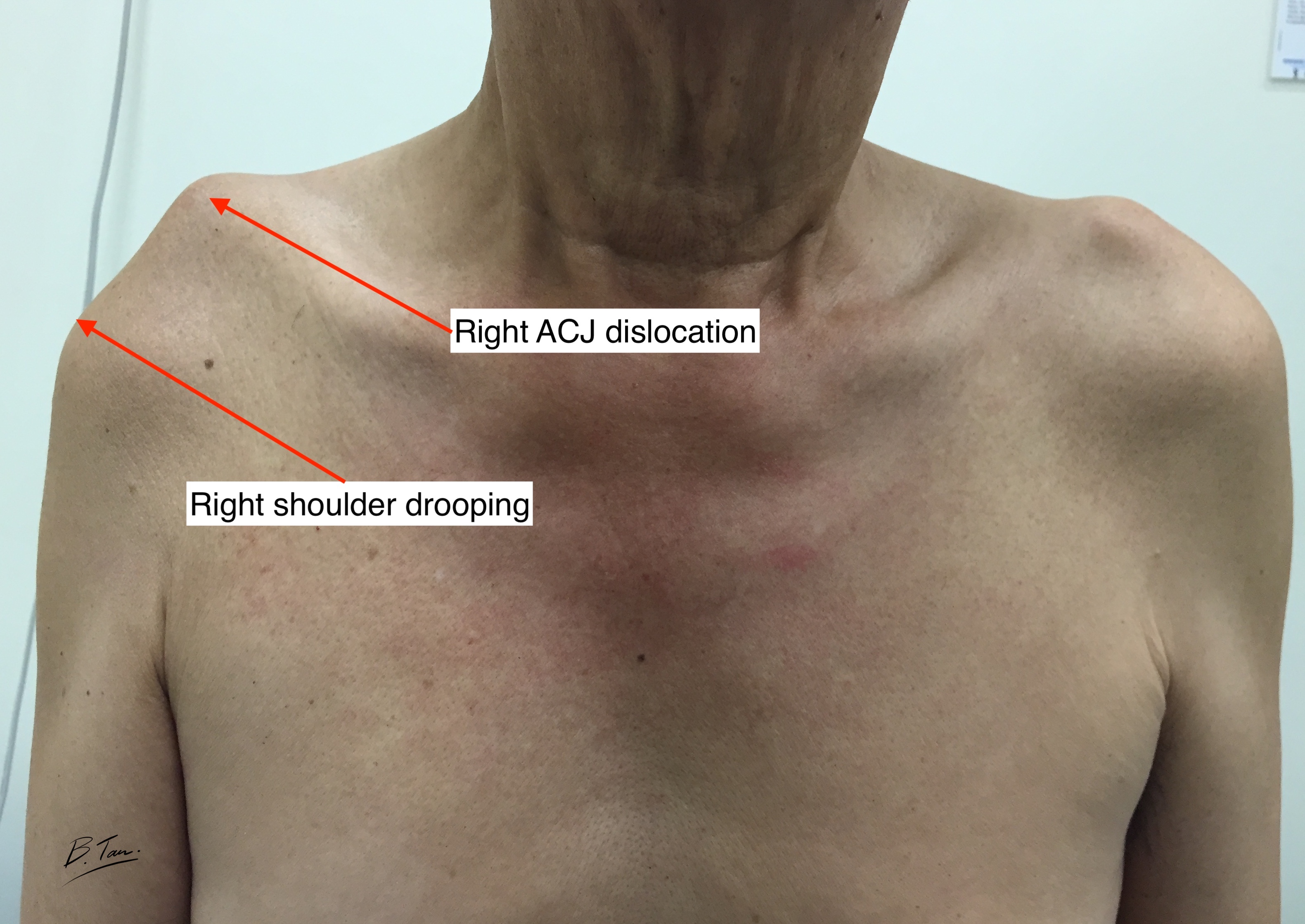 You will have immediate pain directly over the ACJ. Depending on the severity of the injury, there might be immediate deformity in the area as well. The far end of the clavicle will be prominent and appear to be sticking out. This grotesque deformity is often mistaken by patients to be a shoulder dislocation.

How do I get it back in?

You cannot get it back in! More accurately, you can probably get it back in place but it will not stay in place. Gravity constantly pulls your arm down while muscles in the neck connected to your clavicle pulls the clavicle up.

But my friend dislocated his shoulder and his doctor put it back in. And it stayed in.

Yes, but the ACJ is different. When there has been an injury severe to cause the joint to dislocate, that means that the joint capsule together with the ACJ ligaments have been torn. Often times when the deformity is as marked as that in the patient shown above, the CC ligaments have also been torn. Hence there is nothing left to hold the ACJ in place even if it were put back in.

What should I do then?

You should see an orthopaedic doctor. Ideally one who is familiar with treating sports shoulder injuries. While your injury is not an emergency, in some cases, getting it treated earlier may give better results. I’ll discuss this is further detail later on.
In the meantime, wearing an arm-sling will help to support your arm so that the pull of gravity does not keep tugging on the arm, aggravating the pain.

What will the doctor do?

The first thing is to confirm the diagnosis. This is easily done with a simple x-ray. Often it is prudent to do x-rays of both shoulders to compare both sides. This is because some patients’ clavicles naturally sit slightly high giving the appearance it could be slightly out of place. Comparing the uninjured side with the injured side allows your doctor to not only confirm the injury, but also allows him to grade its severity. This is important because milder injuries will do fine without any invasive surgery to fix the joint, but more severe injuries may require surgical fixation.

Besides x-rays, some doctors may also recommend doing an MRI scan. This mainly useful for looking for other associated injuries. A number of patients with ACJ dislocations may also suffer concomitant injuries like labral tears. Please refer to the section on Investigations to learn more about MRI scans.

How are ACJ dislocations treated?

This generally depends on:
1. What is the severity of the injury
2. What is the activity level of the patient? This includes the nature of the patient’s job as well. Meaning whether or not his/ her job is highly physical, involving heavy lifting.
3. How long ago was the injury sustained.
‍
Generally, milder and moderate injuries in fairly inactive patients can be treated non-operatively. Physiotherapy will help patients regain the movements and function of their shoulders.

What does surgery for ACJ dislocations entail?

The objective of surgery is to put the ACJ back in place and keep it in place. Many techniques have been developed to achieve this over the years. Many failed and have become historical. Many shoulder surgeons will treat acute injuries differently from chronic injuries. I generally regard injuries less than 2 weeks old as acute.

For acute injuries, I usually use one of 2 methods, depending on patient preference and size of the patient. For large and heavy-set patients, I use a strong hooked plate which levers against the inferior surface of the acromion to push the clavicle down and keep it in place. This is an excellent and extremely strong method of holding the ACJ stabilized, but a big drawback is the need to remove the plate after a period of about 5 - 6 months. By that time, the ACJ and CC ligaments would have healed. If the plate is not removed, it may cause irritation and pain when patients lift their arms overhead by impinging on the underlying rotator cuff tendon.

For smaller patients, I use a suspensory type fixation, where a hole is drilled through the clavicle and the base of the coracoid process. The ACJ is then brought back into place and held by passing strong suture tapes through the holes, secured over the clavicle and under the coracoid with small metal buttons. This surgery is done via keyhole surgery and there is no need for a second surgery to remove the metal buttons. Please see section on keyhole surgery if you would like to know more about keyhole surgery.

Finally for chronic injuries, I use either one of the above techniques, but I loop a tendon graft around the clavicle and the coracoid process so that the body can, over time, convert the tendon graft into a new ligament to help hold the ACJ in place. A tendon graft is a tendon which is either harvested from the patient’s leg or a commercially prepared tendon procured from deceased donors.

The need to loop a tendon graft increases the complexity of the surgery and there is some evidence that ACJ injuries which are treated early (acute injuries) tend to do better thanchronic ones.

Will I be able to participate in sports after the surgery?

Absolutely. The aim of the surgery is to restore stability to your shoulder, not just during daily activities, but also during sports.

Disclaimer:
‍
The above information is meant to be used as a guide and for patient education purposes. This article is not meant to be a used for self diagnosis or a substitute for professional medical evaluation or advice. As patients may be differing symptoms, please see your family doctor or orthopaedic specialist if you have any symptoms or worries.

Ask and get some answers!

Thank you! Your submission has been received!
We will get back to you usually within 1 - 2 working days.
Oops! Something went wrong while submitting the form. Please try again or you could also contact us via email or telephone!