ACL tears result in instability of the knee which predisposes the patient to frequent twisting injuries to the knee which will put other structures in the knee at risk of repeated injuries. In addition, the risk of developing arthritis in the ACL-injured knee is higher than in an uninjured knee.

In order to understand this topic, some knowledge of anatomy is required.

Anatomy of the Knee Joint

The knee joint is a hinged joint, made up of 3 bones: the femur (thigh bone), the tibia (shin bone) and the patella (kneecap).

As the knee joint is a hinged joint, the main movement that occurs at the knee is in one plane – bending and straightening. However, a little bit of rotation does occur when the knee is fully straightened.

The knee joint is covered with a smooth cartilage that ensures frictionless movements. In addition, 2 crescent-shaped cartilaginous structures known as meniscii (or meniscus is the singular form of the word) exist between the femur and the tibia.

The menisci help to enhance conformity between the femur and the tibia, but also act as shock absorbers during impact experienced during weight bearing. 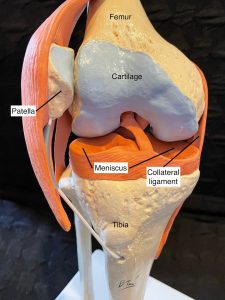 Four (4) main ligaments attached on each end to the femur and tibia help to maintain stability of the joint. There are 2 collateral ligaments and 2 cruciate ligaments. The ACL and its counterpart, the PCL (posterior cruciate ligament) are arranged in a cross pattern when viewed from the side.

The ACL is so named because it is placed in front of the PCL (hence the term “anterior”), and originates from the back of the femur, travels distal and anteriorly, and is attached to the top of the tibia, within the knee joint. 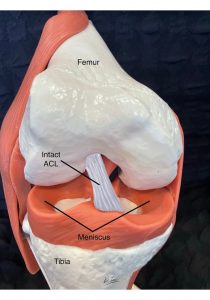 How does an ACL tear occur?

ACL tears usually occur as a result of a twisting injury to the knee.A classic example is that of a soccer player who tries to kick the ball hard. The pivoting foot gets stuck in the grass while the body continues to rotate. This is often further worsened by an external force to the knee that occurs in a sliding tackle. 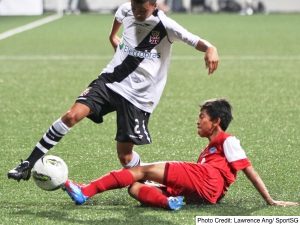 Many other sports may also result in an ACL tear. I have treated quite a few athletes who have torn their ACL during combat sports like Taekwondo or Judo. The mechanism of injury is usually similar; a strong rotatory force.

What symptoms may I have?

Given time, the pain and swelling will resolve. This may take a few months. Patients will be able to resume sporting activities including running. Running in a straight line is usually not a problem, but sports that require rapid changes in direction (cutting movements) will not be possible because patients will experience instability in the knee.

If they persist, they may even reinjure the knee, aggravating any existing injury they might have already suffered to their meniscus.

What tests can be done to confirm the diagnosis?

Usually your doctor will have a strong suspicion that you have torn your ACL. However, he will usually proceed to order an MRI scan for further evaluation. For a more detailed discussion regarding MRIs, please go to the page on investigations.

An MRI (magnetic resonance imaging) scan is by far, the most informative scan, and it will not only definitely diagnose an ACL tear, but will also allow your doctor to assess the integrity of the meniscus, cartilage etc.

I am told I have an ACL tear. How can it be treated?

Most complete ruptures of the ACL require surgical reconstruction. In some patients, the ACL rupture may be partial. In these patients, they may be able to cope without requiring any surgery, depending on their symptoms.

I do not, however, recommend surgery for every patient who may have suffered a complete ACL tear. I have, in the past, advised patients against ACL surgeries. An example would be a slightly older patient, perhaps, in his mid 50s and is not particularly active. Being inactive, it is not likely that an ACL deficient knee will impair him in any way.

Most young and active patients, however, will be better off undergoing an ACL reconstruction surgery.

What is an ACL reconstruction?

There are many ways to do an ACL reconstruction surgery. All techniques try to achieve the same goal – to reconstruct the torn ACL so that the function of a normal ACL can be replicated. The principle of reconstruction is hence, simple.

The torn ACL is replaced by a “new” ACL. This is, however, easier said than done. There are many issues to consider. Questions such as what is the most suitable graft to use, what size to use, how should it be anchored to the bones, exactly where should it be anchored etc have been exhaustively studied and discussed.

Current surgical techniques resolve around the same principle. Tunnels are drilled into the femur and tibia with the tunnel openings placed exactly where the native ACL would have been attached. A suitably sized graft is then fed through the tunnels and firmly anchored in place within the bony tunnels. This allows the body to eventually incorporate the graft into the bone tunnels, thus securing is in place permanently.

After a few years, the graft will then be converted into a ligament, hence replacing the native ACL that had been lost through an injury.

What is an ACL graft?

An ACL graft is a length of tendon used to replace the ruptured ACL ligament. Although ligaments and tendons serve different functions in the body, they are structurally similar as both consist of lengths of collagen, bundled together lengthwise.

Ligaments are not used for ACL reconstructions because ligaments in the human body are generally too short to be used. Those that may be long enough are too difficult to harvest and cannot be done without causing severe compromise to the patient.

However other grafts such as the middle third of the patellar tendon, part of the quadriceps tendon and even tendons from the lower leg have been used.

Allografts, on the other hand, are harvested from donors who have passed on. These allografts are then carefully screened for any transmissible diseases that the donor might have suffered from when alive.

If found suitable, then are then thoroughly cleaned and packed in sterile packages, ready to be used commercially.

You’re going to use my hamstring tendon to replace my ACL?? How am I going to walk if you take out my hamstrings??

If autografts are so good and harmless, why do you even need allografts?

While autografts have been found to be marginally better than allografts, allografts have definite advantages as well. Some patients who have had their hamstring tendon harvested may experience pain at the back of the leg.

Another scenario often seen is in a patient who had a previous ACL reconstruction and had torn the reconstructed ACL again. As his hamstring was previously used for reconstruction, using an allograft may be a better option as he might not like the idea of “violating” another part of his knee for the repeat ACL reconstruction.

Another common scenario I face here in Singapore, is an ACL tear in a small sized Asian patient, in whom his/her hamstring tendon may be very thin and insufficiently strong for the purposes of good robust ACL reconstruction. In these cases, a suitably sized allograft can simply be ordered and used.

Why is reconstruction necessary? Why not just stitch up and repair the ligament?

This is an excellent question! And in fact, the concept of an ACL repair is not new at all. It was in vogue decades ago but fell out of favour due to its dismal success rates.

In recent years, however, improved understanding of the ACL and improved surgical techniques and implants have reignited interest in the concept of a repair.

The native ACL is a short and thick ligament measuring only about 2cm long. Ruptures do not always occur right in the middle of the length of the ligament. The stumps of the ligament are often short and stubby. To make matters worse, the torn ends of the ligament will already be compromised by the tear and may be frayed and weak.

Even if it were possible to bring the torn ends together and stitch them together, the poor tissue quality of the ligament often results in complete failure of the repair. In recent years, however, surgeons have been trying to strengthen the repair by incorporating a strong synthetic tape within the core of the ligament.

The synthetic tape withstands forces and protects the repair from falling apart while the repaired ligament heals. While this is a novel and exciting idea, early results of an ACL repair have not been as good as a “good old” ACL reconstruction.

How is ACL reconstruction surgery performed?

ACL reconstruction surgery is performed via keyhole surgery, combined with a small incision made at the front of the tibia, near the knee joint. For a more detailed description of minimally invasive or keyhole surgery, please refer to the page on Keyhole Surgery. 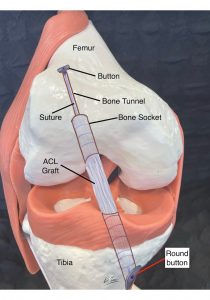 These describe the way the bony tunnels are created. In recent years, the transportal and all-inside techniques have become more popular as the “classical” way of doing an ACL reconstruction using a transtibial technique often resulted in creation of an overly vertical graft orientation.

Some surgeons, however, have modified their transtibial techniques and are able to achieve more anatomically correct graft orientations. Evidence clearly proving one technique to be superior to the other is poor.

Single anatomic bundle vs double bundle. Anatomical studies of the native ACL have shown that it consists of 2 bundles arranged in a slight twisting configuration. This has prompted some doctors to develop a double bundle ACL reconstruction technique, designed to more closely mimic the appearance and function of a naturally occurring ACL.

Many scientific studies have since been done in order to prove that a double bundle ACL reconstruction is superior. Unfortunately, this has not been the case. In most of these studies, it was shown that both techniques yield similar results.

With a double bundle ACL reconstruction, more tunnels need to be created, increasing the chances of something going wrong. Many surgeons have hence coined the phrase “double bundle, double trouble”.

What kind of anaesthesia will I require?

How long does the surgery take?

The surgery usually takes an hour and a half, but complicated cases can take longer.

Is this surgery very dangerous?

Not at all. Risks of any procedure can usually be divided into anaesthetic risks and surgical risks. For most patients, the risk of any serious adverse event happening is less than 1-2%. However, as every patient is different, it is important that you have a detailed chat with your doctor with regard to your risk.

Can I return home on the same day as the surgery?

Yes, certainly you can return home on the same day. Many patients, however, find it more convenient to stay overnight. This is because you may be feeling rather drowsy and tired after you wake up from the anaesthesia.

Will I be able to return to my sport?

Yes absolutely. Most patients are able to return to their sport at a similar level to what they were doing pre-injury.

How long will I take to recover?

Physiotherapy is performed in a graduated fashion, getting patients to progressively weight bear, walk unaided, jog, jump, run and finally get back to their sport of choice. For more details about physiotherapy, please refer to the section on Physiotherapy.